The car chase has become a standard device in Hollywood movies. At times, it seems like every film is trying to outdo the car chase scenes in the movie that debuted the month before.

But what about the actors who star in these movies? Are they the same individuals who actually drive these vehicles wildly across our movie screens? Or do the directors play it safe and hire stunt drivers for the job? The answer varies from film to film.

Let’s take a look at four silver-screen car chases. Hopefully, there were some hefty car insurance policies taken out on these vehicles.

Scene: Two BMWs are chasing Cruise and Cameron Diaz, who are maneuvering a motorcycle through the streets of Seville, Spain.

Actor or Stunt Double? Actor – Okay, technically this is a car-motorcycle chase, but Cruise himself straddled this Ducati Hypermotard bike and sped through narrow alleyways — and even up and over a set of stone steps through a stone archway. Cruise usually does most of his own stunts in his films, including those from the entire Mission: Impossible series.

Scene: An imprisoned man wrongly accused of murdering his wife has to gain his freedom by winning a race to the death around Terminal Island Prison’s racetrack.

Actor or Stunt Double? Actor – Statham is a former Olympic diver who has become one of Hollywood’s new breed of action heroes. In this film, Statham drove the tricked-out Ford Mustang GT with its Roush supercharged 5.4L 3V V8 and performed every spin, skid, slide, and other maneuver. He also trained with a former Navy SEAL for months prior to the movie’s fight scenes — which he also did himself.

Actor or Stunt Double? Stunt Double – Brosnan was the face of the James Bond franchise for four films, but he let professionals take care of the fancy driving. And the ice chase scene was handled by Valdimar Johannsson, who has almost 30 films on his resume. The scene (which takes place on a frozen Icelandic lake) was coordinated by Vic Armstrong, who is the most prolific stuntman in Hollywood history.

Scene: James Bond launches his AMC Hornet off a mostly-broken bridge, executes a perfect 360 barrel roll, clears a canal, and lands on his wheels.

Actor or Stunt Double? Stunt Double – Moore shouldn’t feel bad about passing on this stunt, because it was so challenging and elaborate that the producers tried to patent it. Despite the staggering degree of difficulty, uncredited stuntman Bumps Willard successfully completed the leap, roll, and landing – in a single take. 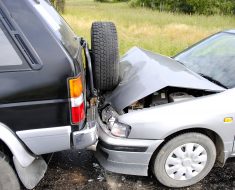