What’s the farthest distance that you’ve ever driven a vehicle over its lifetime? Logging over 100,000 miles on a car or truck is something to be proud of. Traveling twice or three times that distance is quite impressive. But what about turning over a six-digit odometer by driving a car for a million miles? Pretty unbelievable, right? What about doing it twice?

Well, there’s a man on Long Island, New York, who is close to attaining a never-before-reached milestone of three million miles on his car. Meet Irving Gordon, a retired schoolteacher who has logged more than 2,965,000 miles on his 1966 Volvo P1800S. He officially holds the world record for highest vehicle mileage, and his car is still running strong (and because his car is so old, his auto insurance premiums are probably incredibly low).

Gordon purchased the Volvo new in June of 1966 for $4,150, which was about a year’s salary for him. He even paid an extra $10 for an AM/FM radio, but he couldn’t afford to put air conditioning in the vehicle. Today, he’s outfitted the red, two-door coupe with a license plate that reads “MILNMILER.” There are pins of his mileage milestones on his front bumper, and his trunk is full of spare auto parts just in case he needs them while traveling. The engine in the Volvo is the same one as when it was purchased, although it has been rebuilt a couple of times.

So how did Gordon amass so many miles? Lots and lots of road trips. The now 72-year old says that he and his family would often just pack up their things and head out to an undetermined destination. Today, he hits the open road alone, and has visited Texas, Michigan, and Montreal in June of this year alone. Gordon even claims to have had a cup of coffee in every state in the union.

But the main reason behind the longevity of Gordon’s Volvo is his stringently thorough upkeep of the vehicle. He doesn’t let anyone else drive it, and he is obsessive about taking care of it. In fact, his car is in such good shape that Volvo Group has actually sent Gordon around the nation to appear in auto shows.

He hit the one million mile mark in 1987 and surpassed two million in 2002. And it appears that he will become the first person in history ever to drive a car three million miles sometime within the next year. All he needs is another 34,000 miles and change — though he’ll have to get some black tar removed from the carburetor before he can get back on the road again.

Loyalty to other people is considered a virtue. But what about the intense loyalty that a man has for his automobile? For Irving Gordon, it was enough to take him on a ride that lasted millions of miles — and has driven him into the record books as well. 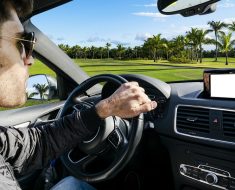