A large majority of Americans have been driving cars with seat belts throughout their entire lives. And yet, even though they haven’t known anything different, some of them still complain about mandatory seat belt laws in this country.

But these rabble-rousers are misguided, because today’s seat belts are arguably the most important safety feature in passenger vehicles today. Yes, even more so than anti-lock brakes, airbags, or crumple zones.

The first type of seat belts to appear in autos was the lap belt. As the name implies, it consisted only of a single strap which was laid across the lower waist and then secured. It prevented passengers from becoming “airborne” inside a vehicle during a crash, but didn’t hold the torso in place at all. So in the 1960s, carmakers began putting sash belts in their cars. This single strap belt draped across the shoulder and fastened at the hip to secure the torso. However, since there was no lap belt attached, people tended to “slide under” the sashes during an accident — thus negating their safety effectiveness.

Eventually, the two concepts were combined into what is most often seen in today’s vehicles. The three-point seat belt was co-patented by American Roger W. Griswold in 1955.

The three-point belt is one length of belt that crosses both the torso and the lower waist before securing at the hip. This design helps disperse the impact of a crash across the pelvis, chest, and shoulders. Newer vehicles are also equipped with two additional safety features known as pretensioners and webclamps. Pretensioners tighten the belt almost instantaneously during a crash to hold the occupant firmly in place. Webclamps grasp the webbing of the strap

and prevent the belt from spooling out during a collision.

So do seat belts get the job done?

According to the National Highway Traffic Safety Administration, over 12,700 lives were saved in 2009 alone because of seat belts. In addition, some 72,000 people in the U.S. survived collisions between 2005 and 2009, thanks to seat belts.

So the next time some idiot tries to tell you that seat belts are overrated, go tell them to take a flying leap. (Come to think of it, that’s kind of what will happen if they are not wearing a seat belt during a car crash.) 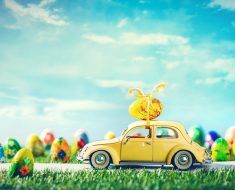