It’s on everybody’s mind as their vacation approaches: How much money am I going to shell out for gas? Even with prices dropping, long trips can still be costly, depending on your finances. So we thought we’d put a bunch of different vehicles to the test.

We chose four vehicles. The Toyota Camry is the most popular sedan in its class, so that was an obvious choice. We also went with Toyota for the Prius. We chose the Chrysler Town and Country as the minivan, since, let’s face it, a lot of summer trips involve minivans and this is a popular model. And finally, we chose the Ford Escape SUV.

Then we found their combined mileage, and used that to divide the trip length. We chose 10 trip lengths, ranging from a half-hour each way to the beach to a long drive 750 miles each way to see the relatives at the lake. Multiply that by the current cost of gas, $3.454, and you have a rough idea of what you’ll pay in fill-ups on your way to and from.

It’s hardly a surprise that longer trips will cost you more money, but it might surprise you just how big the differences were between the different types of vehicles and the costs associated with each one.

The good news is that a short trip to the beach won’t cost you so much as a fill-up. Even the most gas-thirsty vehicle we used, the Town and Country, only burned 2.38 gallons for a 50-mile trip, costing $8.22 in gas. The Prius, of course, only sipped a modest gallon; you can get to the beach and back for $3.54. In other words, getting to the beach will run you a couple of sodas, provided you don’t get those sodas at the beach.

For contrast, a 1500-mile round trip will run you two to three fill-ups per car that isn’t a hybrid. Both the Camry and the Escape burned around 50 gallons of gas, with the Camry coming in at 50 and the Escape coming in at 58. Even more whopping was the price. Not even the Prius escaped paying triple figures, racking up $103 in gas costs. Do it in a minivan, and you’ll be paying $246. Yes, you read that correctly.
SUMMER GAS TABLE HERE

So, how can you cut down on these costs, aside from ditching the kids with your in-laws and buying a hybrid?

Alternately, if you’re going to visit the relatives, why not make them come to you? Hey, they love you, right? They should love you at least $100 in gas’ worth. 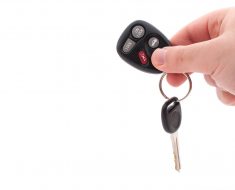