The majority of car commercials tout the product’s strengths and perks for drivers who are alone in the vehicles (or maybe with a front seat passenger). American families with two or more children know those ads are nowhere close to reality. Thankfully, there are some automobiles that cater to large families. Here are the ten best 2012 models you’ll find if you’re part of a growing family.

Honda isn’t just for boxy car-loving, fuel economy geeks anymore. While the Civic does get about 39 miles per gallon on the highway, it has plenty of room for five people at an affordable price. The new display can even show family photographs.

You don’t have to give up the dream of owning a hybrid just because you have children. The Prius V hatchback boasts an average fuel economy rating of 42mpg, and it’s roomier than many of its SUV brethren. Plus, you’ll save enough money on gas during your road trips to splurge for a fancy dinner on your way home.

Sometimes, all you need is a little extra space for your beverage and a few other items. This sedan delivers with roomy seats that each has a greater-than-average amount of cargo space around them. All this comes in a car with stellar crash test ratings and an MSRP starting under $17,500.

It’s got all of the great stuff for families like a roomy interior and numerous creature comforts. It’s especially great for families with older kids because of Ford’s MyKey system which enables parents to set speed limits for their teen drivers.

It’s one of the hottest selling small compact sport utility vehicles on the market because it’s so family-friendly. The cargo area makes it easy to load and organize your belongings, a user-friendly center console, and standard features like a Pandora interface, USB port, and rearview camera.

No question about it – bigger is better. The Suburban can tow up to 9,600 pounds, carry unbelievable amounts of cargo, and keep everyone comfortable in the process. You might be interested to know that it can carry up to nine people. Nine. That’s the entire Brady Bunch and Alice.

You won’t easily find three-row seating and a highway fuel economy rating of 32mpg. It also starts under $24,000. What’s that? You say that you were hooked once you heard “voice-activated infotainment system?” Yeah, that’s not uncommon.

What it lacks in sleekness it makes up for in functionality. Not only does this vehicle have three rows of seats, but it also features a center-console refrigerator so you can keep juice boxes and cheese treats on hand for multiple errands.

There’s nothing wrong with wanting a Mercedes even if you’re swinging single days are over. The ML350 can fit three child safety seats in its rear seat, combining ergonomic kid seating with Mercedes style and luxury.

If you’re a minivan family, the Odyssey is your top choice. Not only does it get high marks for safety and reliability, but it also has a middle seat that can accommodate three car seats, as well as a 16.2-inch rear entertainment screen that will keep your children quite happy. 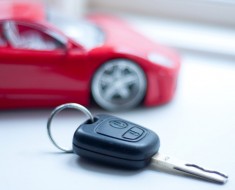