For almost as long as people have been able to drive, they have tended to do so with the accompaniment of music. However, just because you may have the capability to play all types of music on in your vehicle doesn’t necessarily mean that it’s wise to do so. In fact, here are eight types of music which you should probably avoid playing at all costs while you are behind the wheel. Your auto insurance company will thank you.

1. Lullabies. This one is fairly obvious. The soft, tranquil sounds of a lullaby are designed to bring on sweet slumber, which does not mix well with driving. The only exception to this rule may be if you are trying to persuade a baby or toddler to stop fussing and fall asleep (and you are so hopped up on caffeine that you couldn’t possible follow suit).

2. Rap music. This one is actually backed by (pseudo-) science. In 2009, over 2,000 drivers were surveyed about their choice of music to listen to while driving. Almost half of them admitted that rap music causes adverse effects on their driving mood and behavior. But, in all fairness, they’d probably feel the same way if they were forced to listen to polka.

3. Death metal. Loud, repetitive guitar licks. Ground-quaking percussive beats. And unmelodious, growly howls from lead singers. It’s a combination that’s bound to raise your blood pressure and dull your senses — neither of which are suitable for safe driving. In fact, death metal is only okay for weightlifting, home demolition, or axe-murdering.

4. Songs which have spawned popular dances. Remember the Macarena? Soulja Boy? Achy-Breaky Heart? YMCA? (Heck, even the Hokey Pokey?) They’re great tunes, but their respective dances involve hand movements and head turns. Meaning that when you sing (and dance) along with these songs while driving, you’re just asking for an accident.

5. Sad songs. From Sinatra to twangy country to Adele, music has a long and storied history of melancholy-inducing melodies. They have their place, but if you are the type of individual who is overly emotional, the tears you produce while listening to a sad song can obscure your driving vision.

6. Songs with long notes in them. This category mostly applies to drivers who like to sing along with the stereo in their cars. You know those notes that some singers can belt out for eight, twelve, or sixteen measures without taking a breath? These crooners are skilled professionals who don’t get light-headed due to a lack of oxygen. You, however, are not.

7. Opera. This could be classified as a subset of #6, but there’s another danger inherent with this genre. If you are blessed with a high-end audio system, the stereotypically powerful high notes may cause your car windows to shatter suddenly. That’s enough of a jolt to propel you into a light pole or an oncoming lane of traffic.

8. Songs about bad driving. Again, this is self-evident. Jan and Dean’s “Dead Man’s Curve.” Roy Acuff’s “Wreck on the Highway.” The Ministry’s “Jesus Built My Hotrod.” And of course, this speeding anthem: 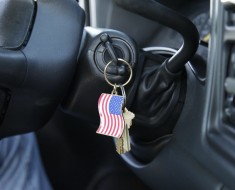