Cars. We need them, we use them, we have to insure them. And sometimes, insuring them makes you wince every time you write out a check.

Fortunately, not every car costs a fortune to insure. For 2011, there are ten cars you can get that will let you travel in style without breaking the bank.

The Highlander pulls number ten only because of Toyota’s recent safety problems. Until the recent throttle problems, Toyotas had a superb safety record, something that’s still reflected in their premium. If you need a somewhat sporty four-door SUV, this will put you on the road with money in your pocket. Just make sure that annoying hipster kid from the ads isn’t sitting in the back seat.

Ford’s got a good safety rating itself, and helping keep premiums down is the wide availability and easy replacement of Ford parts. Not only do they not get in crashes, but if they do, your insurance agent won’t have to raid the couch cushion just to import a part for you. You both save money and, just as importantly, aggravation

The Honda Odyssey is one of the most popular minivans on the road, and also one of the cheapest to repair. A safe car from a safe company driven by safe drivers is pretty much as insurable as cars can get…

…until you also throw “indestructible” into the mix. Despite being designed to take the absolute worst the road has to offer, Jeep Wranglers are often driven in much safer, car-friendly environments. Not that you can’t take it off-road, it’s just that insurers have found it more likely you’ll take it to the Outback Steakhouse than the actual Outback.

Nissans may not be quite as indestructible as Jeeps, but they have a good safety record and are a respected SUV crossover. It helps that they’re designed to run forever with a minimum of repairs. A car that’s never in the garage is a car your insurer, and you, don’t have to worry about.

As you might have guessed, your insurer really loves Honda, and the LX really sums up why. Safe drivers, great safety record, great repair record…walk into an insurance office with a Honda Odyssey LX and everyone leaves happy. Unless you drive the car through the front door, which we don’t recommend; your agent can get up and take a look, trust us.

As you might notice, insurers really love Toyotas. The Sienna LE only pulls third because it has a few more complex systems than the plain Sienna, and those might possibly incur high repair costs, especially for non-essentially systems like the onboard DVD player. Otherwise, it’s a car insurers love almost as much as…

The Toyota Sienna beats the two other Siennas on this list for one reason, and one reason only: the four cylinders means you’re less likely to have an overeager teenager speeding down the highway, or really speeding anywhere. Yes, you save $21 per cylinder!

And here’s the number one car insurers love, the minivan that spawned the entire class of car. It’s a minivan, so it’s driven by safe drivers; it’s got a great safety record; it runs forever; and if you do have to repair it, labor and parts are cheap and simple to locate. For saving money on insurance, it is the perfect car. For impressing the neighbors, maybe consider adding a flame paint job or something. 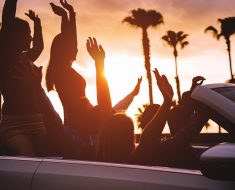