Perhaps you’re familiar with that sinking feeling in your stomach that arises when you see flashing red and blue lights in your rear-view mirror. After you pull your car over, you pray that there’s some sort of mistake, or that you will just get a warning from the very forgiving police officer. But your hopes are dashed as soon as the cop hands you the ticket.

What should you do now? Should you pay the ticket? Or should you get a traffic ticket lawyer?

What Does a Traffic Ticket Lawyer Do?
Before making your decision, it helps to know precisely what a traffic ticket lawyer is and what he or she does. For a flat fee, a traffic ticket lawyer handles the process of navigating your citation through the bureaucracy of municipal, county, and/or state courts, and represents your interests every step of the way. But this usually does not entail arguing before a judge or jury in an effort to establish your innocence. After all, the vast majority of traffic tickets involve people who did in fact commit the infraction.

The goal of every traffic ticket lawyer is to minimize the financial and criminal impact of your violation. Once a traffic ticket goes on your criminal record, auto insurance companies will be made aware of it — and they will generally jack up your premiums for the ensuing years. Plus, a traffic violation can have negative ramifications for the employment status of some people (like couriers or bus drivers, for example).

So if there’s a way that your traffic ticket lawyer can get the court to dismiss your moving violation altogether, he or she will do so. Your ticket can get often dismissed if your attorney discovers a significant error on the ticket itself, or subpoenas the issuing officer and he or she fails to show up for court.

But even if dismissal is not an option, a traffic ticket lawyer can usually keep the violation off your criminal record. He or she can plea bargain with the prosecutor and reach a mutually beneficial arrangement that benefits all parties. This tends to involve you paying the appropriate fine and/or some court costs and either agreeing to take a state-certified driver’s education course (at your own expense) or submitting to a probationary period (of anywhere between 3 and 12 months), during which you promise not to commit another moving violation. Although this agreement may cost you some money up front, it almost always saves you money in the long run, once you factor in the increases you would incur in your auto insurance premiums.

Should I or Shouldn’t I?
More often than not, it is to your benefit to engage the services of a traffic ticket lawyer. This rule applies to almost any type of traffic offense, from speeding and broken taillight citations to making illegal turns and running a red light. If it’s simply a matter of not having updated insurance, you can sometimes present proof of insurance to a judge and have that offense dismissed outright. But if you happen to get cited for DUI, that’s an entirely different legal area (and you will definitely need a lawyer for that).

If you do happen to have the time, the motivation, and/or the requisite legal knowledge, then perhaps you can adjudicate your traffic ticket by yourself (but even then, you would likely only avoid the traffic ticket lawyer’s fee and would still have to pay the fine and/or court costs). In the unlikely event that you feel that you are indeed innocent of the moving violation and feel you have the evidence to support your position, then you can request a trial and act as your own counsel; but the outcome of the case is not guaranteed to be in your favor.

As much as society tends to disparage lawyers, most of them do exist to serve a purpose. Traffic ticket lawyers can simplify the process of addressing your crime while keeping the violation off of your driving record. Given that the charge for these services is usually nominal, it behooves you to consider finding a traffic ticket lawyer instead of automatically paying the fine. 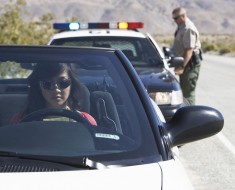